Sweden and Finland are set formally to end decades of neutrality and join the North Atlantic Treaty Organization (NATO), in a historic breakthrough for the alliance that deals a blow to Russian President Vladimir Putin.

The last major hurdle to the two nations’ entry to the bloc was removed when Turkey dropped its opposition on Tuesday.That breakthrough came during a NATO summit in Madrid that has already become one of the most consequential meetings in the history of the military alliance.

The two countries are now expected to become full NATO members quickly, shoring up the bloc’s eastern flank within months of Russia’s invasion of Ukraine. Here’s all you need to know about why the move happened, what comes next and why it matters.

What are the latest developments?

Sweden and Finland both announced their intention to join NATO in May, after Russia’s invasion of Ukraine caused a sudden shift in attitudes toward joining the bloc.

That announcement was welcomed by almost all of NATO’s leaders — but there was one significant obstacle. Turkey’s President, Recep Tayyip Erdogan, said he was not looking at both countries joining NATO “positively,” accusing them of housing Kurdish “terrorist organizations.”

Under NATO rules, just one member state can veto a new applicant’s membership.

However, a big diplomatic breakthrough between the three countries took place at the NATO summit in Madrid on Tuesday. Turkey signed a trilateral memorandum with Finland and Sweden, lifting its opposition and officially welcoming them to join the bloc.

“In NATO, we have always shown that whatever our differences, we can always sit down, find common ground and resolve any issues. NATO’s open door policy has been an historic success,” NATO Secretary General Jens Stoltenberg told journalists in Madrid.

On Wednesday, NATO formally invited Sweden and Finland to join, kickstarting a multistage process that will end with both countries holding full membership. 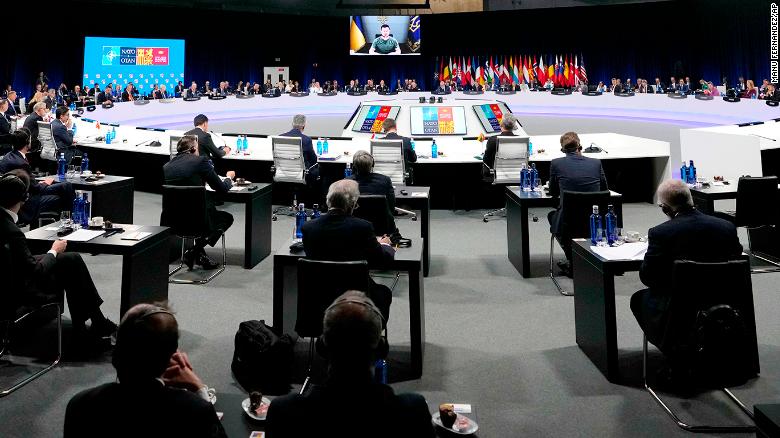 Ukraine’s President Volodymyr Zelensky on Wednesday addressed the Madrid NATO summit, where a key diplomatic breakthrough has paved the way for Sweden and Finland to join.

Stoltenberg said Wednesday that he expects Sweden and Finland to become members of the military alliance quickly.

The invitation sparks a seven-step accession process. Key moments along that path include talks between NATO and the candidate countries. The candidates must formally accept the obligations of membership, and then current member states sign an Accession Protocol, before individually ratifying it back home.

“We need a ratification process in 30 parliaments — that always takes some time but I expect also that to go rather quickly because allies are ready to try to make that ratification process happen as quickly as possible,” Stoltenberg explained Wednesday. After that, the candidate country is formally invited to accede to the Washington Treaty, the founding document of the alliance.

NATO has an “open door” policy — any country can be invited to join if it expresses an interest, as long as it is able and willing to uphold the principles of the bloc’s founding treaty.

The ratification process usually takes about a year, from the signing of the Accession Protocol by existing members to the country joining the Washington Treaty. But the war in Ukraine has added unprecedented urgency to Sweden and Finland’s membership, and the timeline could be accelerated accordingly.

How have leaders reacted?

US President Joe Biden praised the breakthrough with Turkey, saying it sent a clear signal to Russia that NATO was united and growing.

Sweden and Finland’s “decision to move away from neutrality and the tradition of neutrality to join the NATO alliance is going to make us stronger and more secure and NATO stronger,” Biden said. “We are sending an unmistakable message in my view… that NATO is strong, united, and the steps we are taking during this summit are going to further augment our collective strength.” Biden said the two Nordic countries’ accession was a sign Putin’s aims had backfired.

“Putin was looking for the Finlandization of Europe,” he said, referring to the so-called Finlandization dynamic that saw Russia dominant over the foreign policy of its smaller neighbor for decades. “He’s going to get the NATOization of Europe, and that is exactly what he did not want, that’s exactly what needs to be done to guarantee security for Europe. And I think it’s necessary,” Biden said.

The move was met with delight across the countries that make up NATO’s eastern front, many of which have expressed concern that they could be next in Russia’s crosshairs if it is successful in Ukraine. Estonian Prime Minister Kaja Kallas said the step was “significant,” and Lithuanian President Gitanas Nausėda called it “wonderful news.”

khaskahbar/Rakesh Jhunjhunwala, the man known as India’s Warren Buffett, died of a reported cardiac arrest Sunday at the age of 62.The death of Indian

External Affairs Ministry spokesperson Arindam Bagchi said India categorically rejects the OIC’s Secretariat’s “unwarranted and narrow-minded comments” and asserted that New Delhi accords the highest respect to all religions. India on June 6, 2022 hit out at the Organisation of Islamic Cooperation (OIC’s) for its criticism of the country in the wake of the alleged derogatory remarks made […]